In my last post, I asked, “Which Italian City has the largest piazza (square)?” The answer is Trieste. Trieste is one of those cities whose identity is somehow different and more complicated than the country to which they belong.

Italians often say that “Trieste is in Italy but not of Italy.” As the former Austro-Hungarian Empire’s busiest port, the city looks like a Mediterranean Vienna rather than a typical Italian port. For well over 700 years, Trieste was part of the Hapsburg Empire, and like the empire itself, the people of Trieste were (and to a great degree still are) as diverse as the Austro-Hungarian Empire had been. Italy took over the city only in 1918, after World War I.

It was coffee that first brought me to Trieste. I am addicted to coffee. I was at the cantina at my banking job in London when an Italian colleague, seeing the double espresso in my stressed hand, told me that the best coffee in Italy was in Trieste. As it happened, that year (2008) we had planned to visit the Croatian Coast, a few hours away from Trieste. “You know what you have to do,” my colleague said.

And so it was. From Croatia’s Krk Island in Dalmatia, we drove about two hours, through the Istrian Peninsula to the Croatian-Slovenian border (we will visit these at a later date). We crossed a small sliver of Slovenia and arrived at Trieste. There is no longer a border. The suburbs of Trieste are in Slovenia; always have been, since the Allies and the Yugoslavs divided the city into various zones after World War II. Most of Trieste went to Italy, but the eastern and mountain suburbs went to Yugoslavia (today Slovenia). This Slovene-Italian mix is the most obvious one in Trieste, but by no means the only one.

To get in to Trieste, we had to go down at a steep grade, for the city is arranged like an amphitheater hugging the hills down to the city. Very little ground is level, and much of that is reclaimed from the Adriatic. It makes for a breathtaking sight, whether looking up from the port, or down from the Slovene mountains.

Trains carried freight and passengers on the express up and down this coastal spur of the Alps to Vienna, Prague, Budapest and other cities of the Austrian Empire. Today, it is a sleepy city, not much larger than a century ago when it buzzed with an empire’s commerce. Around town there are elegant baroque and neoclassical buildings, a Grand Canal evoking a miniature Venice, fabulous churches and, of course, coffee.

Illy, one of the world’s largest coffee brands, has its headquarters here, and the Triestines seem to consume a great deal of the inventory. This is, of course, Italy, so good food comes with the scenery, though here just a bit of Austria and Hungary are in the dishes, but the coffee is something else and celebrated with Austro-Italian panache in its cafés. 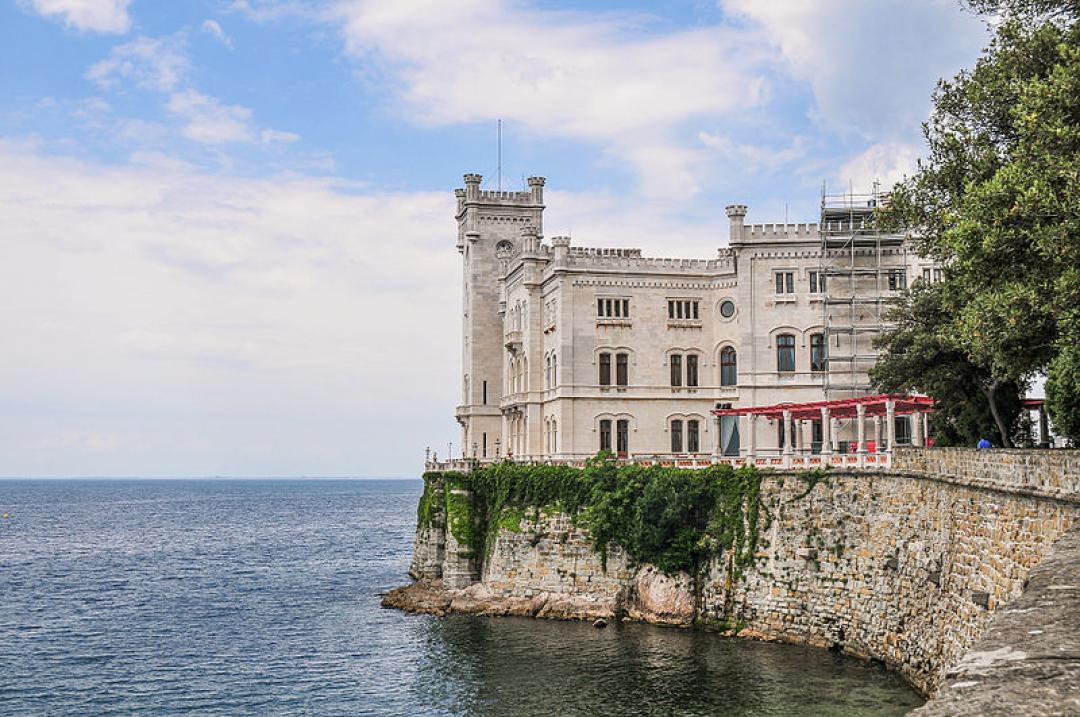 The Grand Canal, a canal from the Adriatic Sea to the Church of St. Anthony the Miracle Worker (Thaumatourgist), modeled on the Pantheon in Rome (which we visited in our last posting). Lining the canal are beautiful palazzi of Trieste’s key merchants from the bygone era of Austria Hungary. The Serbian Orthodox Cathedral of St. Spyridon, its Byzantine architecture a proud standout in the midst of the baroque and neoclassical buildings, is also worth seeing.

Caffe Degli Specchi, Café of Mirrors, founded well over a century and a half ago by a Greek merchant of Trieste (Greeks and Serbs were a major part of the commercial and shipping class in Trieste). I had the pleasure of taking coffee there with Fr. Gregorios Milaris of Trieste’s 1790s-era Greek Orthodox Church, who, over a fantastic cappuccino, spoke to me about the Greek community’s long history there. Caffe Degli Specchi looks out on Piazza Unita, Italy’s largest square.

Caffe Tomasseo, right next to the Neoclassical Greek Orthodox Church on Trieste’s waterfront. It has the best cakes in town, full of history, which the multilingual, elegantly dressed staff are happy to tell.

The James Joyce Tour. The Irish author spent a few years here, teaching languages and generally moving house to avoid paying rent. The PromoTrieste Convention and Visitors Bureau runs a walking tour of his haunts. Contacting the organization is also a great way to start planning your trip to Trieste.

Trieste can be enjoyed in a weekend. Choose the smaller, boutique establishments, such as at the Hotel Impero. Expect to pay 120 euros for a family of four, with a sumptuous breakfast easily tiding you over until an afternoon gelato with your coffee.

Trieste is an ideal stop for a glimpse into the lost world of Austria-Hungary, and from Trieste Vienna, Venice, Ljubljana, Zagreb and the spectacular Croatian Coast are only a few hours away. Whether for a coffee stop or to stay a while, Trieste is worth the trip. Moreover, there are few tourists and large crowds -- just a once-great city enjoying a long, elegant retirement from its former buzz. Its grandeur, nostalgia and more than a hint of melancholy make for a contemplative and romantic stop.

Alexander Billinis is a Greek-American who has a lifelong interest in Byzantine history and its continuing, though little known, relevance to today's world. His point of view is greatly influenced by being part of the Diaspora, which makes him both an insider and outsider to the Balkan region where Byzantium's successors experience a rather complicated and frustrating existence. He has lived and worked in Bulgaria, Greece, and Serbia, and has traveled extensively to other countries that have had influence on the Balkans, including Turkey, Italy, Austria, and Hungary. His interest in this area's culture and history is balanced by the calculating analyses of an international banker, his career for more than a dozen years. His work is equal parts history, travelogue, combined with political and economic observation and commentary.A graduate of Georgetown University's School of Foreign Service, Alexander Billinis majored in East European Studies just as the Communist bloc was in the process of dissolution, at a time when history and culture once again emerged over ideology. He followed his studies with a semester at Budapest University of Economic Sciences and an internship in Sofia, Bulgaria. He also earned advanced degrees in international business and law.Working for various global banks took him and his family from Utah, to Chicago, to Athens, and to London. He has written for various Diaspora Greek and Serbian publications in the US, Canada, Greece, and Australia.